I finished the test of the game rules with interesting and satisfactory results. I did not take any battles off the board because I was looking to test the game rules only. I used the Risk battle rules (red dice vs. white dice) and they worked well to fill in. In fact this is almost like Risk+ and can be played as a game by itself. But adding the actual battles will make it more than just a game.

My general view of war in general, and the wargames that play it out, is that there is a hierarchy:

- Campaign (as phases of a war)

Most wargaming seems to be either at the one-off battle level or battles within a campaign scenario. Some may go to the next level up. The scenarios have either been already written and you follow them, are historical events and you try to recreate them, or imaginary which means you write the scenario, like in Imagi-nations. I wanted to try an imaginary “world” in which the top level of the hierarchy comes first. It is not pre-written, but almost writes itself as situations change, disasters occur, conflicts arise. War is then the result usually because: 1) rulers become greedy and aggressive, 2) nations are threatened by possible or actual belligerent actions by other nations, 3) loss of access to natural resources, etc. 4) unexpected natural disasters and world events.

My development guidelines were:

3. Fog of war throughout

4. A framework for wargaming using all levels of the “war hierarchy”, and usable in any period and with any battle rules the player desires.

5. Built primarily for the solo wargamer.

6. Long enough to be challenging, but not too long to be boring.

I was pleased in that my test result met these objectives for the most part. I did tweak the rules as I went along, and realize there are many variations I can try to make it go faster, run shorter, use other maps, tweak some more, etc.

It started out as a 4-nation “world”. Two of these ultimately surrendered to more powerful nations, and finally the remaining aggressive nation prevailed over the remaining moderate nation. It was about 12 “years” long. Each year had four turns, and a turn (all nations moving) represented one season, so overall there were approximately 40-50 turns. Many of them went quickly. Record-keeping was not ponderous since I was able to represent status mostly with markers on the board. The first 5 years were movement, reaction to disasters, and a few takeovers of territories by attacking their garrisons. In the rest of the years, 3 wars broke out and 15 land battles were fought. There were no naval battles.

The following pictures will show the Risk board at the start and end. I will not try to explain in detail what occurred, but they show how much things changed in the course of the game ….. 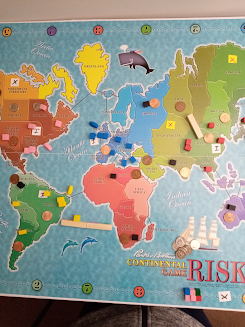 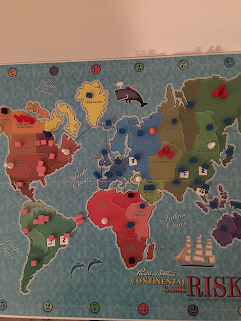 This was my first effort of this kind to create a wargame “game”, and it worked well for me and was satisfying. I will put this aside for now for other wargaming projects, but I will come back to it because I want to try some other stuff out such as:

- get more naval action into it

* random events – ruler dies and is replaced by a lunatic, revolt occurs in one of the territories and it must be quelled

GENERIC WARS – FINAL UPDATE I finished the test of the game rules with interesting and satisfactory results. I did not take any battles of...

dalethewargamer
I am retired. I "discovered" wargaming a couple of years ago and enjoy solo gaming in ancient, ACW and Napoleonic eras. Constantly looking for new ideas, rules, maps, etc. Just starting to publish my own ideas.